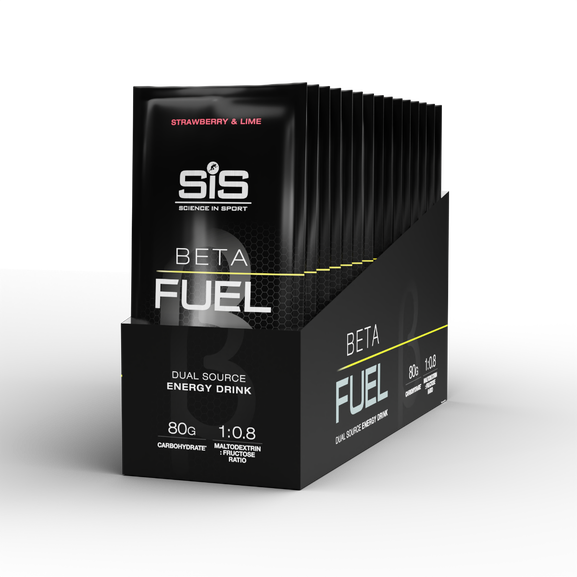 THE MOST SCIENTIFICALLY SUPERIOR ENERGY DRINK ON THE MARKET

WHY YOU SHOULD USE BETA FUEL DUAL SOURCE ENERGY DRINK

As an endurance athlete, meaning your events typically last more than two hours, you need to take in between 80-120g of carbohydrate per hour. The Science in Sport Beta Fuel Dual Source Energy Drink delivers an optimised 80g of carbohydrate in a single, convenient isotonic fuelling solution with minimal risk of GI discomfort that enables you to maintain optimal performance.

THE SCIENCE BEHIND BETA FUEL HAS EVOLVED

Through our Performance Solutions team, we have worked closely with elite athletes in the research and development of the new Beta Fuel range to bring you a scientifically superior fuel in a range of formats that allow you to use +17% more carbohydrate (O’Brien et al, 2013).

One sachet of Beta Fuel Energy Drink contains one serving (82g) of powder. Tip the mix-and-go formula into 600ml of water and shake to dissolve. It's that simple.

Pratici ed efficaci per me

Just follow the instructions and the benefits will show themselves...Great addition to rides..

Best energy drink I have used

Seems to do the trick, I use it for races and events and it keeps the legs going nicely - I would recommend having it in a 500ml bottle and have a second 500ml bottle of plain water for something more refreshing. Also, make sure you put the powder in and then the water, it really doesn't work the other way around, trust me.

Great product. I use with homemade rice cakes. Together they easily make 60-80 gms per hour

Doesn't taste too sweet, which I like, and it is easily digestible too.

This is my go to rocket fuel

Brilliant product. Definitely feel the difference between rides with and without.

Magic stuff. Guarantees no bonk - would not be without it, have done events like Tour of Flanders & Fred Whitton with this in the bottle no energy issues.

Haven’t tried them yet, but I’m sure they’ll be great.

Loved it for a long ride, one bottle makes 80 gram carbs. Taste pretty good as well, as I was sceptical at the start.

After riding for 4 hours, this is like rocket fuel taking me comfortably into the next four hours.