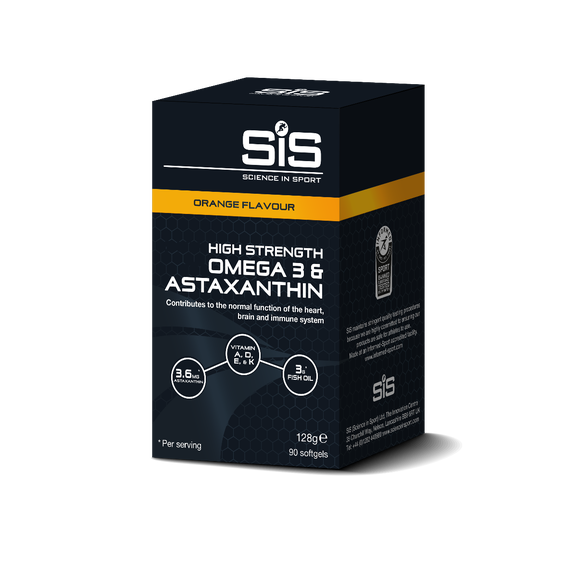 Omega 3 fatty acids are compounds usually found in oily fish. Of these fatty acid compounds, two are of importance when supplementing fish oil into your daily diet: eicosapentaenoic acid (EPA) and docosahexaenoic acid (DHA). Both EPA and DHA are building blocks of immune cells, act as inflammatory mediators and support cardiovascular health.

The Science in Sport High Strength Omega 3 + Astaxanthin delivers high levels of EPA and DHA. Astaxanthin is a carotenoid with anti-inflammatory and anti-oxidant properties. Dietary astaxanthin has shown an enhanced immune response and decreased inflammation.

Alongside the aforementioned health benefits, astaxanthin has also been investigated in relation to exercise performance. In a trained cycling group, astaxanthin supplementation resulted in a significant improvement in 20km time trial performance and power output following a 2-hour steady state ride. Reductions in muscle damage have been measured in athlete groups supplementing with astaxanthin.

High Strength Omega 3 + Astaxanthin is tested under the Informed Sport Certification program. This approach involves testing every single batch of SIS finished product, which leaves the Company’s factory, screened against the 2018 World Anti-Doping Agency (WADA) list. Banned substances including steroids are tested to the level of 10 Nanograms per gram, and stimulants to 100 Nanograms per gram. Batches (sampled at the beginning, during and end of each product batch) receive the recognised and respected Informed Sport* certificate and Science in Sport provides the documentation to athletes on request.